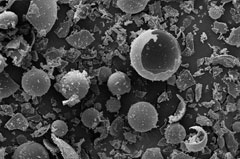 Cenospheres are artefacts of FA. Some of the FA particles are hollow as a result of gas evolution during the molten stage of the ash formation mechanism. These hollow, essentially thin-walled glass spheres (10 - 350 microns) are comprised largely of silica and alumina and filled with air and/or gases. Cenospheres are formed in flue gases when it is in a molten state. The particle density will depend on the size fraction, however, the average value is around 600—700 kg/m3. It is generally noted that about 1% of all FA may be in the form of Cenospheres.

Cenospheres will float on the surface of ash ponds from where they can be collected using floating booms. The recovered material may be processed, bagged and sold to various industries. Cenospheres may also be extracted from dry FA.

The major application for Cenospheres is as an inert filler in products such as paints, varnish, plastics, ceramics, and ultra-light concrete and metal alloys. Cenospheres are effective insulators as they have poor conductivity properties.