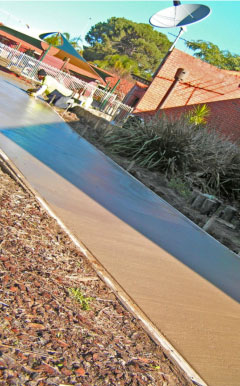 Geopolymers are a class of inorganic polymer formed by the reaction between a strong alkaline solution and an amorphous aluminosilicate source or feedstock (ref www.geopolymers.com.au ). FA is an excellent feedstock when utilised as geopolymer cement (binder). The hardened material has an amorphous three-dimensional structure similar to that of an aluminosilicate glass. When blended with a conventional aggregate skeleton (stone + sand), a geopolymer concrete is formed, which in general has superior properties to the equivalent conventional OPC concrete. Such concretes will cure slowly at room temperature (see photo) but cure rapidly with the application of moderate heat (eg steam at 40 to 90°C) making them an ideal concrete for precast applications.

Coarse (gravel-size) and fine (sand-size) aggregates for concrete and other applications can be produced from FA by partially transforming CCPs into geopolymer pellets, which are artificial rock-like silicate materials, produced by synthetic reactions between the ash and the alkaline solution at temperatures below 100°C.

Geopolymerisation involves the dissolution of aluminium and silicon from the surfaces of waste materials followed by the condensation polymerisation of active surface groups and soluble species to form a gel and subsequently, a hardened geopolymer structure.